Hello! Guys it's a hundred percent the most buzzy review that I've ever done. I had top-end smartphones, huge OLEDs and QLEDs, drones, but the projector... It seems to be so famous thing, that is, I know that there are such devices, wonder nothing. But when you just turn off your 40-inch tv and turn on the projection next one hundred and thirty inches, it is more than three meters wide you in a second understand that damn why I have not done this before. In general, today I’m first, I want to tell you about myself LED projector XGIMI H2 which all this gave out. And secondly, it will be a review the person who first completely abandoned the TV and switched to a 3-meter projection. Day and night.

If you have never run home projector then sure it will be interesting to know what is it like. If it’s clean, then it’s very, just a very small fraction I experienced this wow effect when i had a tablet Lenovo with a projector. After him, I became interested this topic, started googling what how. And either googled like that, or I just don’t get to the end but in the end I just found a bunch of nuances because of which in my case the projector will not work normally. A bunch of prejudices appeared. Need to calculate the distance think how to mount ceiling mount with drywall in which the place to do it where to hang the canvas and etc. In the end, everything seemed complicated and I put this idea aside then. But here comes this cube. There are no special expectations anymore, did you understand. I bet in broad daylight him to your desktop pointing at plain wall with plain wallpaper, just to at least shone somewhere, turn on into the outlet a couple of steps and I just falling into a stupor. With two and a half meters a huge one appears on the wall, 100 inch screen. One hundred inches!

These are more than two meters width. When I go to the cinema then ready to see the movie on a huge screen at the entrance the hall does not wedge me. But when this screen appeared at my house, on my wall - believe me, this is shocking. Once again, after all these prejudices I generally did not count at that moment and in those conditions see at least something adequate - with open windows, without special canvas on wallpaper and at an angle. Now the conditions are slightly different, we shoot in the office but impressions The same. That's how I broke for myself two stereotypes. Firstly, and in the afternoon, not the most Bright projector can be watched. If at least minimally tighten up - just close blinds and hang a little bit normal canvas - to suffer not at all. How it turned out, I’ll tell a little bit later. Secondly, no problem at all find a place for the projector. I remind you, I put it at an angle of about 45 degrees, at first the picture was trapezoidal forms, but how simple is it corrected in the settings. There are three options. Auto Correction - does not work perfectly. Manual correction. And the highest trapezoid correction where setting more flexible. I somehow read that such edits kill detail. But then I didn’t notice at all no consequences like loss of clarity. The only thing with high brightness original form viewed for configured screen.

But with a decrease in brightness until the middle she rushes in the eyes. In addition, in the settings can choose the position projector and reduce the picture. This is already useful to me in another room when customized the 130-inch screen! Three-plus meters diagonal! Despite the fact that I have there was no special screen for a projector, from three meters I only occasionally noticed wallpaper texture. The brightness immediately seemed a lot, twisted to half. Contrast black saturation - it's all on absolutely normal level. I understand that there are tube projectors with contrast 60 thousand to one, not 5, as here. But from the point of view of the inexperienced eyes - the picture is excellent. I’m going from the TV never lacked in none of its components. In standard settings I didn’t want to change anything, but there is an opportunity. From the contrast slider not much use, but here with brightness, color and temperature You can play. There are also options regarding noise, sharpness and compensation movement. The last option is an analog Motion Plus on Samsung or Tru Motion on LG - she does The image is smoother. More precisely, artificially increases frame rate video. Not everyone likes movies, including me, but, for example, sports gear does livelier. The function works fine, I didn’t see any brakes everything is very smooth.

There is still a contrast enhancer. When you turn on part the light is cut off by the curtain image becomes darker. But the joke is that it turns on she is on a distant menu and no opportunities immediately on video evaluate the result - you need go out, do and come back back. I generally didn’t notice of particular benefit to her if it is, then minimal. What else is interesting and useful? is there on the menu? First attracted YouTube. Everything is familiar here, I didn’t like it. just that at the slightest body movements back in the menu - the application is visible unloaded from memory so how it starts again. This is strange because with the same films like this no - when the movie returns starts from the same place. Nothing more on the menu in this regard no youtube and chrome it's empty. In the store, if its so you can call it too recounted on fingers, so that only download apk files and install them yourself through available file manager.

The rest of the system pleases - this is Android 6.0 with a proprietary shell. The latter is very simple and understandable, sort it out - a matter of a minute. It works quickly, smoothly and without brakes. The remote control is also convenient - small ergonomic and push-button minimalism. The most important of these is inclusion. air mouse that complements Classic 4 button navigation. He let me down just one time. After turning on the projector For some reason, the connection has disappeared. Hold down two buttons for repeated connection and he immediately connected back - so no problem. In the built-in player select audio tracks, subtitles and there are 3D options that XGIMI H2 also supports. With heavy files, with high bitrate, there were no problems. If the video quality is normal - the projector is generally barely audible. He stands a meter from his head and at minimum volume the sound completely covers fan noise. But if the bitrate is high and resolution, as expected Full HD, then the noise rises a bit, and at minimum volume cooling is already annoying. But overall, it works quiet - 8 watt speakers + passive emitter rustling over easily at a percentage of 20 power. By the way, they are here from harman / kardon. Not to say loud, but quality - there are also low a little and high in order.

Given that the projector anyway costs about ears, then I personally need them for movies completely sufficed. For clips no longer. To do this, remember that the projector has a good set of ports: regular mini jack, optical S / SPDIF, by a pair of USB and hdmi, as well as Ethernet. In addition, there is a dual-band Wi-Fi, bluetooth, for connecting keyboards and mice as well ability to display content from Apple Android smartphones and by Miracast. In general, full stuffing. And since I touched the case, then a little about him. He is beautiful and neat. from all sides. Matte surfaces, prints do not collect at all, but for protect the most important there is an automatic curtain which closes at turning off the projector. Nearby camera for autofocus, which is beautifully induced. Focus starts switching small toggle switch on the remote. As soon as you click - the projector focuses first, and then, suddenly, what’s wrong, can be corrected with buttons, they are now responsible for the trick. But he never missed me. More from the interesting on the case there are a couple of buttons, I them I didn’t use it at all as well as the touch strip volume control. I also tried a couple of times for interest and that's it - the remote very good and reach out to the projector there is no point. Well and most importantly - the source Sveta.

As already said - this is an LED projector. If you watch 2 films every day then that’s enough for 20 years of work. Therefore, you can not spare him, like the same tube with five by thousands and for example use its for games. Ooh, games. Know that feeling when you buy a new, big TV instead of small and immediately there is a desire review all cult movies on his screen? You’ve seen them ten times already, but now feeling like for the first time. Here is the same thing. I played with a PC and on a three-meter screen everything goes for cute soul: and Half Life, and the first Bioshock and Stalker, at the end ends up wanting again rebuild. Main keyboard and mouse wireless add you can drag a chair leave for the clock. Input Lag is of course - small, but there. I will say this in single games pay attention to him the first hour or two, and then fine. Of course, better at this time Do not return to the computer in contrast, the difference is felt and then, returning to the projector, again you get used to it for a while. Network games, in most There are definitely no cases. Yes, there are glimpses when the gameplay is slow but here all the same to the reaction rates, therefore this minimum Input lag annoying. So no wonder game projectors come up with. In general, it all depends on the projects, when a lot of action is needed reaction, then yes - it is felt. But the rest of the time just you enjoy the huge screen and immersion in the atmosphere. In general, it's time to finish already, the projector is really very cool topic. If possible, I recommend take. Yes, I have it completely and failed to refuse from the TV because in the evening all the same the sun blinded a wall with projection, but after sunset, screen two, three wide, or even 4 meters at home is something. XGIMI H2 itself mostly pleased. Only once connection with remote control lost.

Otherwise: compact, nimble, with convenient controls and all the necessary functions. Unless sensible applications count 2 and which store then a beggar, but it's an android - we have pens and apk. For the rest, he’s nothing obliges, just bring put it in the room at an angle of 45 degrees, turn on to the outlet, literally for minute you rule the trapeze focus automatically and that’s it. You can watch movies or play on the screen with a diagonal not 40 or 55 inches, but 100, 130 or even 150 inches if we are talking about ordinary apartment or house. Even without special mounts and canvas, just plain I was really happy with the wall brightness, contrast and in general - by the way he shows sounds and works. If you still have minimal preparation - hang special the screen will be perfect. These are my impressions from XGIMI H2 and generally from the first projector as such. I hope I managed to convey your emotions. Write what you think about this topic and in particular about the cube and also give know if video liked - like, subscribe, kolok - well you know. Bye! 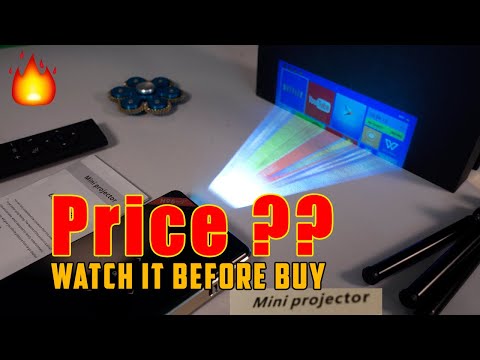