How do you find a great smartphone? A big and bright display, a long-lasting battery, some great cameras, great design or a fast processor? If any of these features fall in your criteria to pick a new smartphone, you can tick all of these boxes for the Samsung Galaxy A70. Hi I'm Nandini, Tech2's resident internetwali and this is the video review of Samsung Galaxy A70.

Samsung Galaxy A70 comes with a 6.7-inch Super AMOLED display which Samsung calls as the Infinity-U display. The colours are bright and crisp and for video viewing and gaming the screen size is excellent which also brings me to the design part of this device. If your device screen is big, it generally means the phone too will seem big while using it. So if you have tiny hands like mine, handling the phone is slightly a task, but having said that, I also feel Samsung has done a very good job with the design of the body of the Galaxy A70. Also the back of the Galaxy A70 is made out of plastic but it has a glossy finish. It has a glass effect on it. If you'll look at the device from afar, it will look extremely simple, solid coloured device, but the moment some light falls on it, it looks beautiful because of this prism- rainbowy effect it has on it. Coming to the performance of the Samsung Galaxy A70, this phone uses the new Snapdragon 675 SoC coupled with it is the 6 GB RAM and 128 GB internal storage. When you play PUBG, the experience is great. You can play it on high setting. There are no frame drops, the phone doesn't hang, but the phone does heat up a little while playing PUBG. Apart from that, the overall performance is quite amazing.

You'll not face lags during app-switching, or while launching an app.

But I must mention that the past one week when I was using the device, twice or thrice, apps like WhatsApp and Instagram did hang. WhatsApp suddenly became unresponsive, the touch wasn't working. I had to switch off the phone and switch it on again. So that is something which may or which may or not get better with time on the device, but it is not such a great thing to happen to the phone. I also really want to mention about the in-display fingerprint sensor on the Galaxy A70 which is probably one of the only things I did not really like about the phone. It's really annoying! You have to pay a lot of attention on how to place the finger how much pressure is to be applied, how much time you'll have to place your finger and personally this is just too much permutation and combination for me, to just unlock a device. I was not really happy about the fingerprint sensor and that's that.

Now that I've vented that out, let's move to the camera of the Galaxy A70. This phone has a triple camera set up at the back which comes with a 32 MP + 8 MP + 5 MP triple camera setup. Which has a PDAF, depth sensor and a wide angle lens.

The phone's image quality is really nice. Daylight pictures especially are great. Details-wise, colour-wise they're really nice. The night camera pictures are also pretty great. I think one of the only phones that you can compare it within this category is Nokia 8.1.

The selfie camera on this phone is also pretty awesome. The colours, the image separation everything is great however when it comes to the portrait mode, edge detection is kind of bad in this phone. Your shoulders, the baby hair around your head they just get all smudged. So that's not really great. And finally the battery of the Samsung Galaxy A70 will easily even with all the apps you use, you know I've been using Instagram, WhatsApp, Facebook, Pinterest, Slack, so many of these apps and the battery of the phone comfortably last you the entire day. Software-wise Samsung Galaxy A70 comes with Android Pie based One UI which is Samsung's latest user interface. Within this, you'll find almost all the Android Pie features with slight tweaks by Samsung. Such as, you can turn on or turn off its navigation buttons. There are lots of hand gestures, lots of customizations. It's pretty nice and simple much better than what the earlier Samsung UI looked like. So should you spend Rs 28,990 on the Samsung Galaxy A70? I'd say of course! It's a great phone. It has a very neat UI. It has a brand new processor so that there are no real problems when you're using this device, but if you're still looking for another phone in this segment, you could also look at the Poco F1 which comes with the Snapdragon 845 chipset which is a flagship chipset and it is also available at the same price range.

I think there's a difference of ten bucks or something in the highest variant of Poco F1 which comes with 8 GB of RAM. Let us know in the comments below what do you think about the Samsung Galaxy A70. If you haven't already, subscribe to Tech2's YouTube channel. Thank you for watching our videos. Keep sharing, keep liking them. I'm Nandini Tech2's resident internetwali signing off. Thank you! .

Samsung Galaxy A70 Now Available to Buy in India: All You Need to Know 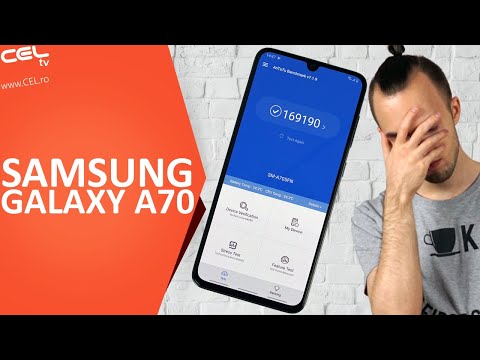